A story that is over an year old has just reemerged as from  nowhere. What and why? 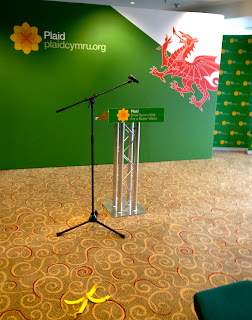 It’s about Leanne Wood the Plaid Cymru leader. No, not her conference speech last Friday, but about an oath she took on the day the Queen opened the current session of the Assembly last June. It was an oath expressing allegiance to Welsh republicanism. Taken in, the appropriately named, Mischiefs wine bar.

It was in a meeting held under the auspices of Balchder Cymru a radical nationalist group.
Now a film of the event was placed on youtube at the time. (http://www.youtube.com/watch?v=4ffBpnIWHRA&feature=relmfu).

But at the time the story was drowned by the preoccupation in the media with Ieuan Wyn Jones, the then leader of Plaid Cymru, deciding to take his holidays and missing HM's visit.

At the time  Leanne Wood's oath swearing seemed to be a passing footnote in history. It was dismissed as the usual suspects showing their leftist credentials

But, of course, the world turned upside down. Against the odds this radical, oath taking republican became Plaid Cymru’s leader. And as consequence her past became of interest to her political opponents. So a bit of oath swearing between consenting adults becomes in the hands of a practitioner of the black arts political dynamite.

But the puzzling thing is why did her political opponents decide to use it now. Which opponents we don't know, but the finger of suspicion points to Labour. They've  form in using their opponents past to cause havoc. And indeed it's Labour that have been using the social media to spread the story.

It’s not a surprise that they’ve trawled the web to find this damaging story, but the surprise is that they’ve chosen to use it now.

Now we're all used to political parties trying to spoil each others conferences. Indeed some more cynical of the press corp thought that last Friday’s event organised by the  Welsh Government to celebrate our Olympians was an attempt to steal the limelight from Ms Wood’s conference speech.

But to push this story after Plaid’s conference is inept. Surely it would have been more effective to keep it in the cellar and brought out at a time when it would have done some real damage to Plaid. Election time, comes to mind.

At a time when Labour's riding high in the polls and there is little sign that Plaid Cymru under Ms Wood’s leadership is making any headway, why now? Unless, of course, that  there's some private polling that shows that Leanne Wood is more of a danger than seems apparent to the rest of the world.

Of course, there could be another more sinister explanation. It may not be Labour at all. The culprit could be  someone from Plaid Cymru itself. There have been mutterings of  disenchantment with her leadership. As Harold Macmillan once said your opponents are opposite, your enemies sit on the benches behind you. It might yet again be proved to be a very apt in this context.

There is a lesson here to all ambitious politician, be very careful who you share a platform with. Today’s comrades in arms, could be tomorrow’s liability.