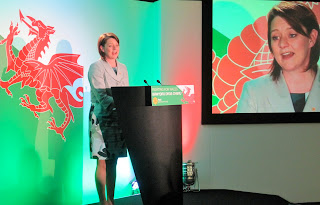 POW’s the initials not of prisoners of war but of the new re-branded Party of Wales formerly known as Plaid Cymru.  Whilst the rest of us were enjoying the late Autumn sunshine Plaid Cymru, oh shucks sorry, Party of Wales, Assembly Members went away to seminars to learn to love each others and to be loved in turn by the electorate.

The outcome? To try harder with the monoglot English speaking voter in Wales. And how was this to be achieved? I hear you ask.  Well, ditch the use of the name Plaid Cymru. Apparently the use of the name is a big turn off. As a political expedient they are going out of their way to appeal to the English speakers. So its Welsh out, and English in. Don’t turn in your grave Saunders Lewis.

So this week they’ve all made a special effort in the Assembly  not to use the term “Plaid Cymru” in their orations, if that is not stretching the term oratory to much. No, the party AMs were liberally spreading the term Party of Wales in their many utterances.

Although the edict hasn’t quite reached as far as Plaid or should it be Party of Wales’s Westminster wing. Hywel Williams sent a press release out with the sexy title, “PLAID SAYS WELFARE OF THE WELSH PEOPLE ISN’T SAFE IN WESTMINSTER HANDS.”

Although to be fair to him,  he tried to make amends later in the release with the new brand  "That is why the Party of Wales will continue to call for the devolution of specific benefits budgets such as those for disability, and the transfer of powers over job-creating levers in order to tackle the broken economic backdrop that leaves so many dependent on the welfare state."

Not the most succinct sentence you’ll come across granted, but at least the latter part of the press release was now on message.

But it’s not only the name that’s had a transformation but attempts were made to change the character of Assembly Members themselves. Positiveness, now that’s the new mantra.

If Members at the seminar had negative thoughts they had to throw coins into a hat. The Party of Wales have not released whose coins filled the hat.

But for all their new age practises, the enterprise was almost derailed by the nocturnal drive of their youngest Member. She surely must have caused a great deal of negative thoughts within her party. However, they soldier on.

Come election time if two smiling individuals turn up at your door speaking English and being positive about the world, don’t slam the door in their face thinking they’re Mormons. Chances are they’ll by POWs not escaping but garnering votes.
Posted by Gareth Hughes at 14:13