It’s official the economy is back in recession. The Office for National Statistics said that in the first three months of 2012 out put had fallen. To be precise it shrank by 0.2%.
Not only did the economy shrink in this quarter but follows contraction of 0.3% in the last three months of 2011. This means that economy has suffered a double dip recession which means it has shrunk over two consecutive quarters.
Clearly the economy is  still in a very weak state and the government’s economic programme is not producing growth.
The economy has been flat lining for some considerable time and the politicians have only one mantra “austerity.”
It is the same blinkered approach that made the great depression of the 20th century last so unnecessarily long. Indeed it’s a little known fact that the UK economy has performed even worse since the current financial crisis than in the so called “great depression.”
The fact is that coalition’s government has failed in its attempts to produce growth. But the truth is that the official opposition haven’t really got any real answers either. Their approach is “austerity light.” The same cuts but over a longer period. Not a radical approach.
What is required is a complete reversal of the cuts agenda until the economy shows signs of strong sustained growth. It should also reconsider its approach to benefits. What’s the sense in cutting the income of the poor, when these are the very groups who spend every penny they receive. Benefits should be increased to boost demand in the economy. 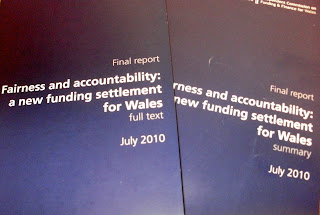 A programme of public works ought to be launched to strengthen the country’s infrastructure.
Wales should have the powers to deal with its own economy. The work of the Silk Commission should be fast tracked so that such powers are granted to the Assembly sooner rather than later.
The latest unemployment figures show that Wales’s economy is certainly in the doldrums.  Currently, the Assembly has only limited scope to do anything to improve the situation. Change is required. And soon.
Posted by Gareth Hughes at 15:10